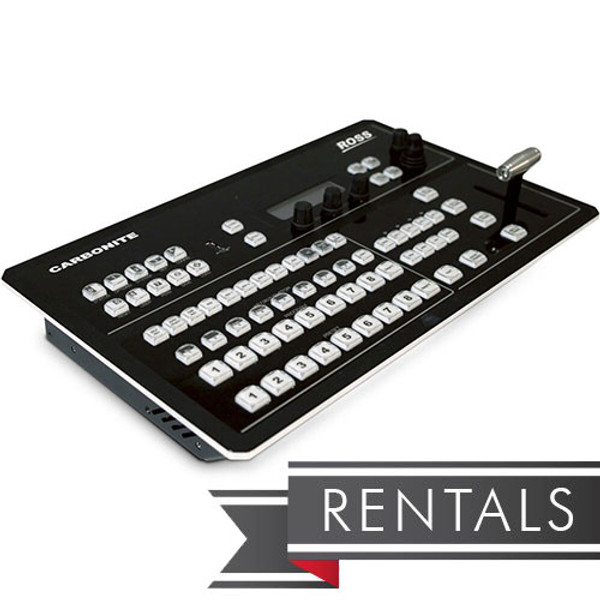 The powerful, single ME in Carbonite Solo, includes 4 keyers plus a transition keyer, for DVE and Media Wipes, as well as, one high quality Ultrachrome chroma keyer. Solo also comes equipped with 2 MiniMEs - perfect for use in event production or for secondary outputs. Each MiniME has two keyers of its own - providing Solo with an amazing 9 keyers in total. Solo's impressive video feature set also includes: a MultiViewer and Four MediaStores for animated graphics and stills. Solo is unmatched in its class in the ability to control devices - including robotic camera, video server and audio mixer control interfaces. It is integrated with DashBoard making it possible to create a purpose built user interface for specific production environments. Solo can also be used with ViewControl, a touch screen user interface that integrates the live Solo MultiViewer into a touch screen control panel and makes running a production super-easy.

Carbonite Solo is available three ways. The first is the beautifully styled, all-in-one with combined control panel and electronic processing, offering maximum portability. The second, the rack mount electronic frame with soft control panel is the most cost effective. The third, a control panel plus separate electronic frame for installations where it is desirable to separate operation from electronics. All Carbonite Black Solo systems ship with an XPression LiveCG software license to provide production graphics. If the deployment also includes a separate XPression Go, Prime, or Studio system- it can be used as an additional Designer seat.
View AllClose

$6,999.00
Product Highlights: - Intuitive interfaces and a significant level of operational control provide you a new level of production efficiencies -A choice of combined panel and switcher...
ROS-CBSOLO13-90
$6,999.00
Add to Cart Quick view

$6,999.00
Product Highlights: - Intuitive interfaces and a significant level of operational control provide you a new level of production efficiencies -A choice of combined panel and switcher...
ROS-CBSOLO13-90
$6,999.00
Add to Cart Quick view