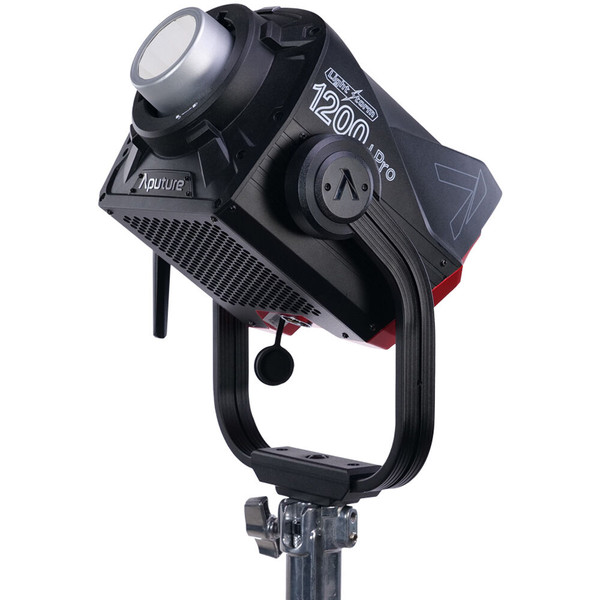 The Light Storm 1200d Pro is the flagship Light Storm product and the brightest fixture in the Aputure and Light Storm lineup. It utilizes a 1200W Daylight COB chipset to compete on the same level as industry-standard HMI Lights, with a staggering 83,100+ lux output at 3 meters with the Hyper Reflector (Narrow).

To adapt the output and beam angle of the Light Storm 1200d Pro to your shooting scenario, the 1200d Pro kit includes 3 different Hyper Reflectors optimized for the size of it's COB.

As a professional Light Storm series fixture the 1200d Pro features enhanced, stepless dimming, as well as light control in 0.1% increments, ensuring that you get the exact amount of light that you need.

Designed for professional lighting technicians, the Light Storm 1200d Pro integrates sACN and Art-net via a durable etherCON connector, as well as wireless Lumenradio CRMX, in addition to its responsive on-board controls, DMX512 5-Pin XLR In and Out, and Sidus Link® app compatibility, to seamlessly integrate into existing lighting workflows.

Sidus Mesh integration allows users to control the 1200d Pro from nearly any smartphone or tablet with the Sidus Link mobile app up to 400 meters away with the addition of other fixtures, including the Aputure LS 600d Pro, LS 600x Pro, Accent B7c, MC, and Nova P600c.

As the flagship Light Storm product, the LS 1200d Pro also features a new control box design. The new control box has DMX512 In and Out ports, an industry-standard etherCON connector, two 48V/15A 3-pin XLR Inputs, and an AC Input that are all housed on the side of the fixture in an orientation that maximizes flexibility while minimizing damage. This allows the control box to be positioned upright on its feet, so it can be set down on set seamlessly. The control box also features two Lightning Clamps for different orientations on your light stand.

As a 1200W COB LED with a maximum power draw of 1440W, the Light Storm 1200d Pro is high-powered fixture that can compete on the same level as HMIs, while still featuring the ability to be operated using DC battery solutions. The 1200d Pro's control box has two 48V/15A (720W) DC Inputs. Providing power to one input will operate the 1200d Pro at half power, and providing sufficient power to both inputs will operate the fixture at full output. With its 1440W maximum power draw, the LS 1200d Pro can also easily be powered using a Honda 2000W generator compared to comparable HMIs that might overload the system.

The LS 1200d Pro features a detailed LCD screen interface that, including a revamped professional UI that displays important information in an intuitive way, including easy-to-read intensity and color information.

Housing the 1200d Pro's lamp head, redesigned control box, and 3 Hyper Reflectors, the 1200d Pro is accompanied by a rolling lamp case, and reflector carrying case, making transporting the fixture to and from set a breeze.
View AllClose